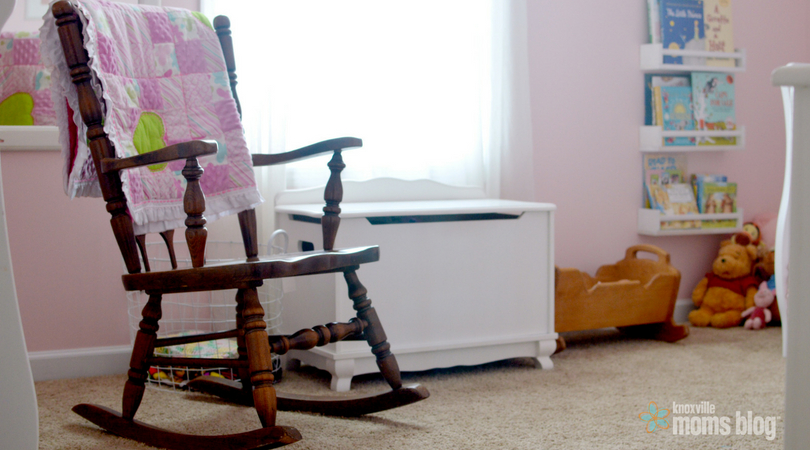 While pregnant, I, like a lot of people, got a glider. It was actually one of the items that I was most excited about! It was white and pink, and came with a stool which I could prop my feet up on. It matched the nursery perfectly and I loved it. When my daughter came home from the hospital, I spent all my time in the glider pumping breast milk, feeding her, and rocking her. All that time spent in the nursery, but my daughter didn’t sleep there. She slept in our room and she continued to sleep in our room for the next two and a half years. Eventually I stopped going into the nursery and I stopped using the glider, as neither of us were as fondly attached to it as I thought we would be. Instead, I was more fond of any extra minute of sleep I could get, and getting out of my bed to go to the nursery to pump or soothe the baby didn’t make any sense when I could do it in my room.

As my daughter grew, her favorite way to fall asleep was to be cuddled in your arms laying down together. So, that’s what we did. She never learned to self-soothe and I was okay with that because I wanted to soak it all in. Then we bought our house and we no longer had room for the glider. Thus, I sold it, since we weren’t using it. Our girl continued to sleep in our room (now in our bed) and life went on as it had been.

Eventually though, she moved into her own room and her own bed. She started falling asleep on her own with the comfort of a lullaby and her favorite blankets, no longer the comfort of mommy’s arms.

As a working mom, I always deeply valued our nightly time together because some days it was all the time we had. I knew that it was a necessary evil, to learn to sleep alone, and the healthier choice for both of us. Bedtime stories and goodnight kisses became our new normal instead of curling up together to fall asleep, and it mended that little hole in my heart that came with the change. I envied those who cared for her during the weekdays while I was away, knowing that they were holding her tightly and rocking her to sleep when I never was. That time had passed for us because I had to let her grow and I couldn’t slow down time.

Then there was the night that we had company over and our spunky three-year-old girl didn’t want to sleep in her bed. Instead, she curled into my lap in our cozy, old recliner and we rocked. Her too-long body lay sprawled across my lap and she slept. My heart was full. The next night we resumed our usual bedroom routine, but she wanted to rock. I don’t know about you, but it’s hard for me to get out of a big recliner and carry my three-year-old up the stairs when she’s asleep. So, we sat on the floor and I rocked her.

Now, we have a rocking chair in her room.

It doesn’t match her room, it’s old, and it squeaks. It was actually the chair my mom rocked me in when I was a baby. We don’t rock every night, and when we do, I don’t always rock her until she falls asleep. Sometimes it’s just ten minutes of cuddles in that rocking chair, sometimes it’s just a bedtime story. Other times we are there for an hour, resting in each other’s warmth while I listen to little baby snores. Some days, we don’t touch it at all.

She’s three and I just got a rocking chair because one day she won’t ask me to rock her to sleep. One day this will pass, just like all things do — good and bad. She will grow and she’ll need me less and less, if I’m a good parent. Her independent self will soar, just like my pride in the amazing little girl that she is. But for today, we have a rocking chair.