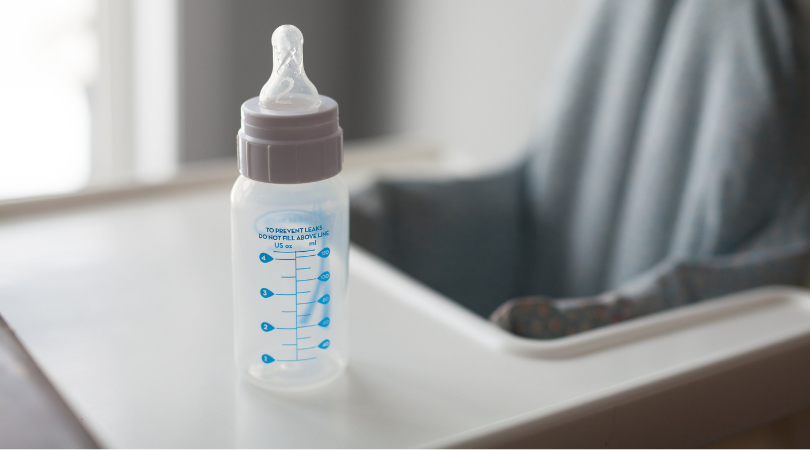 I had no doubt in my mind when I became pregnant for the first time how I would feed my babies. Of course, I was going to breastfeed my twins. I wasn’t naïve enough to think it would be easy, but the thought of it not working never crossed my mind. I knew twin moms who exclusively breastfed, and if they could do it, then so could I.

Unfortunately, breastfeeding did not go according to plan.

At the time, I couldn’t see it, but I can say now with confidence that I tried my very best. No one should ever have to justify their choice to stop breastfeeding (or to not breastfeed at all), but just know that I drank the teas, worked with a lactation consultant, read the books, used the hospital grade pump, etc. But ultimately, it just didn’t work for me. And sadly, I did not handle it well. I felt like a failure.

I allowed so much of the joy of the early days of my girls’ lives to be stolen by the stress and guilt of trying to feed them a certain way. I cried so many tears of frustration and felt like a terrible mom. I genuinely (and wrongly) believed my lack of breastfeeding would lead to me having sickly children who would grow up disadvantaged because of the way they were fed as infants. I could not let myself off the hook even though my mental health was suffering and I was barely able to produce enough milk to give them both a bottle’s worth each day. There was this invisible finish line I felt like I had to reach before I could let myself stop.

Now that time has passed, I can see how wrong my mindset was back then.

I was so focused on such a tiny part of motherhood that I couldn’t see all the great things at which I was succeeding. I am so proud of myself for trying, but I am even prouder of myself for choosing to stop when it became a detriment instead of a benefit. Sometimes being a good mom means letting go of our expectations for how we think things “should” go when things don’t go the way we pictured.

Well, here I am four years later, pregnant again and faced with the same question of how I will feed my baby.

There are a lot of things I have forgotten about the newborn stage. A lot of my memories of the early days are one big sleep-deprived blur. But I will never forget the pressure and guilt I felt in relation to breastfeeding. So when I started to consider how I will feed my baby this time around, I immediately resolved that this time will be different.

My new approach: if breastfeeding does not work again, I will let it go and it will be ok. I am going to give it my best shot again, but it’s not going to be do or die for me. I can breathe easier this time. I will be prepared. I am going to pull all those nursing bras I never really used out of storage and reread the breastfeeding books. But, I will also buy formula just in case and I will do it with a smile on my face and with a clear conscience.

I know better this time. My twins, who I was sure were going to be ruined by the formula I fed them, are doing great. They are both healthy, happy, intelligent four-year-old girls. They look and act the same as all the kids I know who were exclusively breastfed. They are certainly not lacking anything in life because they drank more formula than breast milk.

Also, I won’t worry about being judged. I am going to do what’s best for my baby and my family. I hope the people in my life and the people I encounter can respect my decisions, but if they don’t, well, that’s on them. I refuse to spend time feeling ashamed or doubting myself. My self-worth as a mom is not going to be defined by the way I choose to feed my baby.

Breastfeeding might work this time…and it might not. I don’t know what the outcome will be. I just know I will do my best and this time it’s going to be enough.

All Tied Up: What’s Up With Lip and Tongue Ties?

Baby-Led Weaning: Why We Use and Love It!

The Only 4th Trimester Survival Guide You’ll Ever Need: What No One Tells You