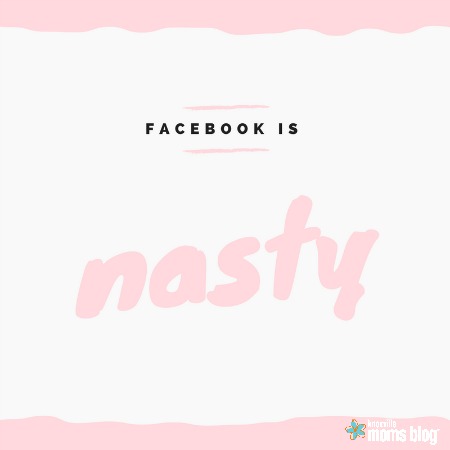 Facebook is nasty. I have no second thoughts about saying that. Apparently with the heated political race, people feel there is no better place to air their grievances than on the walls of their Facebook pages. Conversations — which is a generous way to describe what’s actually taking place — are happening ALL THE TIME about things that won’t be solved on Facebook. Gone are the days of seeing everyone’s babies and what they had to eat, and I really miss those days.

Facebook is nasty. It has become everyone’s platform, except it shouldn’t be. Sure it’s a quick and effective way to spread a message, but that doesn’t mean we should all be spreading our messages. In the last several months I have seen fewer than a handful of peaceful, mutually respectful discussions on the ol’ book. Most of the time it’s just yelling and anger and hate, and y’all, that’s just nasty.

Recently I commented on something a friend (let’s call her person A) had posted on Facebook. The post was a cartoon that left interpretation to political leanings; however, the meaning behind the cartoon was one that should leave all humans sad, regardless of which party you prefer. I simply commented “this makes me sad.” Next thing I know, a Facebook “friend” of mine (let’s say person B) had commented on it. I had two problems with this: person B doesn’t know person A and the only connection the two people had was me; problem number two was that person B jumped all over person A going on and on about how they were responsible for all the terrible things in the world because they posted this cartoon and therefore they must be awful. I’m paraphrasing the comment but that was the general gist.

As soon as I saw that my heart sunk.

I couldn’t believe that someone was being attacked unprovoked. It made me realize that there is no space to just share. No space to have a thought. No space to just be. I was also upset that someone would just attack a person they don’t even know, but then I realized that’s happening all over Facebook right now. It’s everywhere and has become a sort of norm.

But the thing is, I cannot stand it. It’s nasty.

Story number two: I don’t post political things on social media. I don’t engage in back and forth, and I don’t post my opinions on it for others to see. One night I was reading other peoples’ conversations (because I do that) when I came upon one that caught my attention. As I read on, some things hit a nerve. It was as if someone came into my living room and said horrible things to my children and followed it up with a big insult directed at me even though I wasn’t even in the conversation and they said nothing to me. I was so mad and felt so defensive of my kids, so I typed up a long reply. It was complete with the facts this person was missing, along with some solid insults to drive my point home of how off base this person was. I felt justified in my reply, but at the same time I was ashamed of how quickly I jumped to such a heated level. And what is crazy is that I don’t even know this person. It’s a friend of a friend and probably someone I will never lay eyes on, which certainly doesn’t make it anymore okay.  I was upset with myself for falling into the Facebook nastiness.  Ever since then, I’ve stayed off and stayed quiet.

My Facebook explosion got me thinking: While I would have still had that same conversation in person, although I hope in a better tone, the protection of being behind the screen gives a false sense of reality. We are hidden behind this screen, protected to say whatever we want — for better or worse. And it seems to be for worse these days.