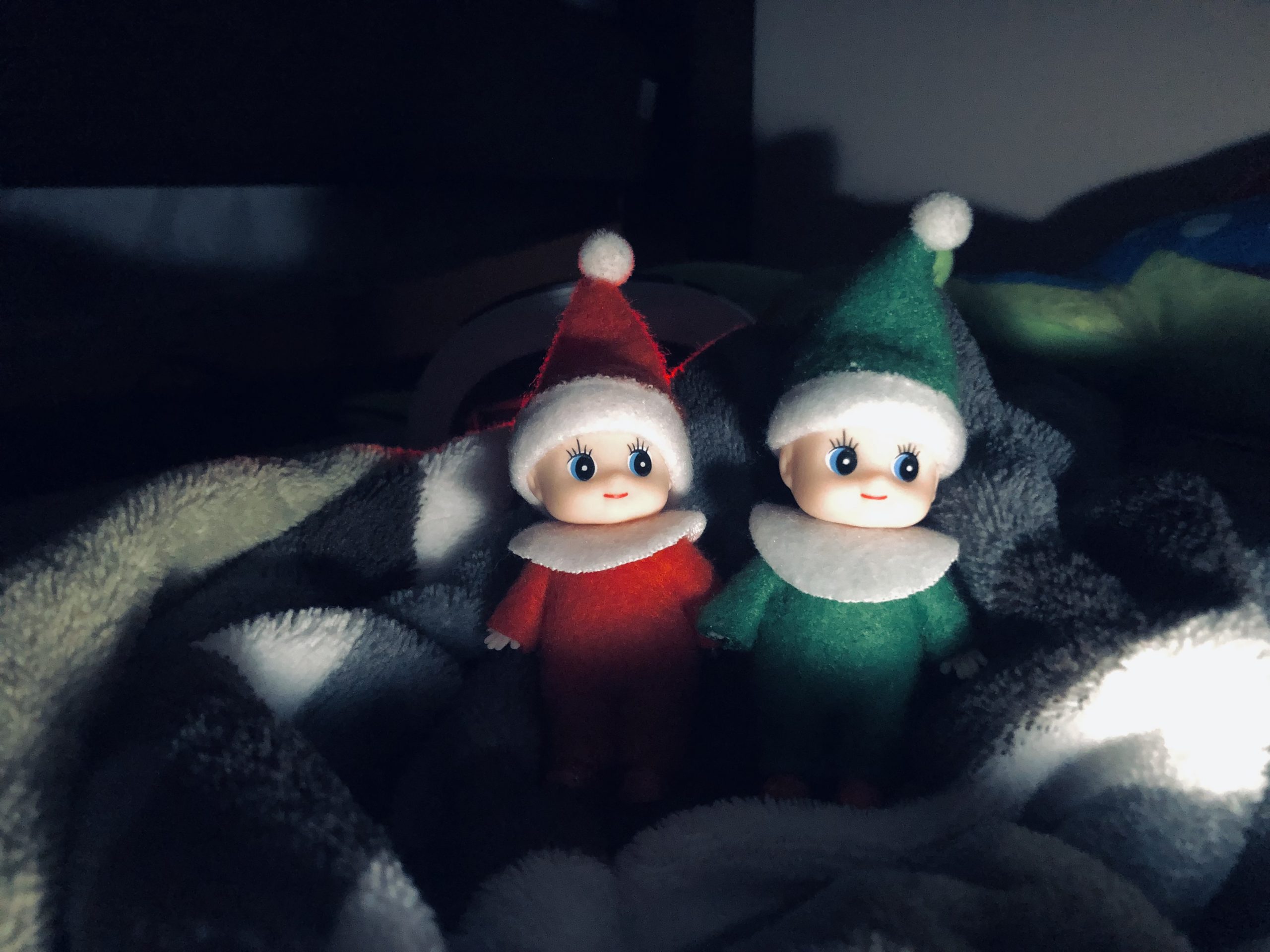 I realize that Elf on the Shelf is a controversial topic (lodged firmly in between people who own multiple Christmas trees and people who prefer white string lights to multi-colored), but I’m only opening this can of worms so that I can share my horror story and perhaps save a few lives in the process. 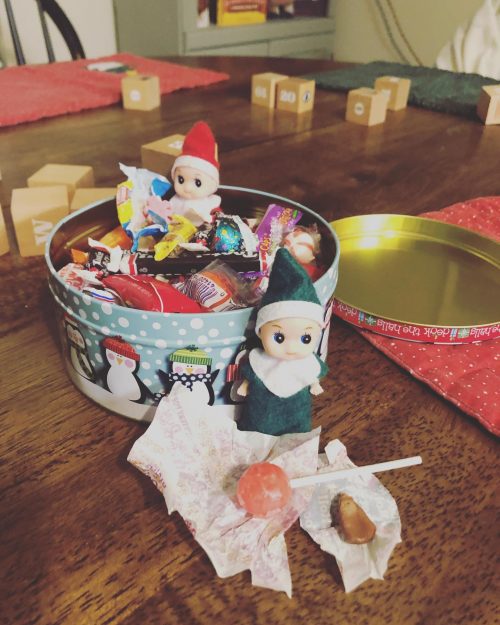 I had successfully avoided Elf on a Shelf for the first several years of my children’s lives, but this year I caved. I heard somewhere that someone would be awarding a prize to the mom who created the most Christmas magic (that’s still true, right?), so I threw my hat into the ring.

My first mistake was starting with elf babies (harvested fresh from the branches of an evergreen tree on Thanksgiving Day, as per the folklore that I made up on the spot for my children). It was my intention that the elf babies would grow into elf children, and then eventually grow into elf adults.

However, my seven-year-old quickly became terrified of the elf babies. While they are adorable when seen by the light of day, they apparently take on a sinister appearance in the dead of night. He woke up at 3am on multiple occasions and swore that the elf babies were standing on the end of his bed, holding hands with each other and staring at him menacingly, with their shadow exaggerated largely on the wall by the glow of the nightlight.

He’s convinced that it wasn’t a dream, and it actually happened.

I tried to assure my child that he was merely the victim of an overactive imagination, but in the days following his nighttime terrors, I started to notice strange occurrences going on in our house, and I was struggling to come up with a reasonable explanation. I lost my car keys one day and finally managed to find them in a place where I never put them. I’ve found doors unlocked overnight when I know for a fact that I locked them. Important papers have gone missing; you name it, and it’s happened.

After each of these strange occurrences, my youngest calmly took my hand and explained to me in a slow, exaggerated voice (the kind you use to explain a complicated concept to a small child who doesn’t understand) that the elf babies have been the culprits behind all of these events.

And he seemed so sure of it. 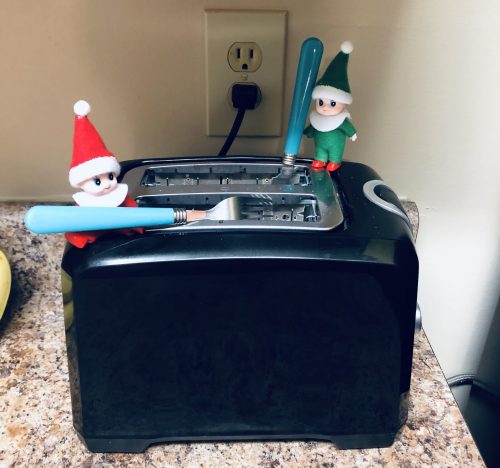 A couple of times, I placed the elf babies carefully on the kitchen counter and then turned around to find them gone. One day I went to both boys in a shrieky sort of panic, asking if they’d seen the elf babies, and my youngest found them in a weird place that none of us had put them. Now I’m starting to wonder if the elves have supernatural powers. Or maybe my kids are using elf on a shelf to keep my behavior in line! What is happening?!

In any case, this has all taken a turn from Christmas cheer into some kind of a horror movie plot, and I determined to safely lock the elf babies in a cabinet from which they will never escape to terrorize our family again, per my son’s middle-of-the-night tearful request. And still, they were not in the cabinet the next morning. Instead, I found them in the bathroom sink, and they had multiplied somehow. 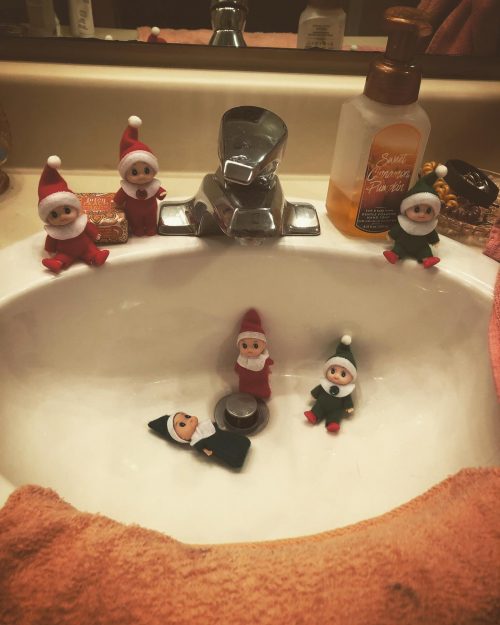 Naturally, I decided to do what anyone troubled with a demon/poltergeist/ghost/frightening supernatural being would do. I sent them in the mail to my friends. One elf baby arrived safely at its destination, much to my (former) friend’s horror and dismay. One elf baby became lost in transit, and the U.S. Postal Service can’t tell me where exactly it’s going to end up. Better check your mailbox. 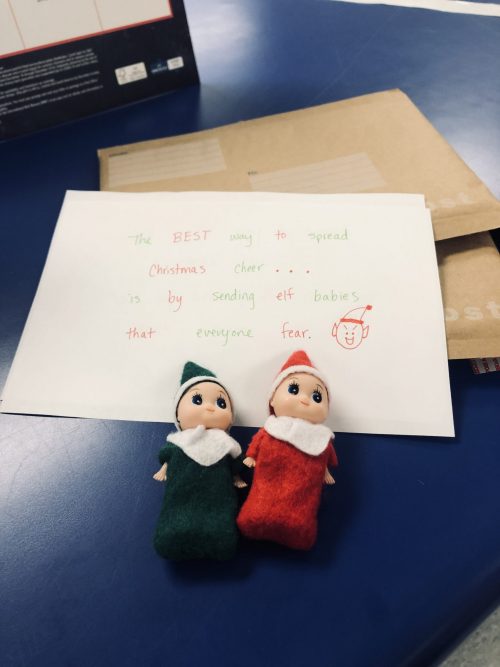 This is my PSA to do your family a favor and refrain from inviting these little elf terrorists into your homes this holiday season, please and thank you. Time for me to go stock up on holy water. 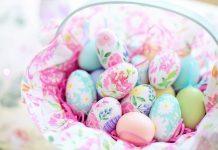 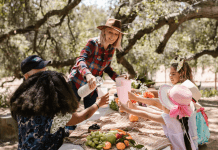 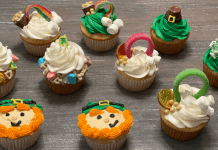