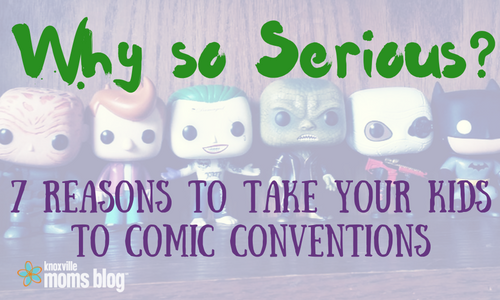 My kids…they’re real characters. Especially when comic conventions roll around.

Three years ago, we made good on a birthday promise to Baylor by taking him and a friend to meet a voice actor from a show he loved. We had no idea how kid-friendly we would find the whole event to be, or how much fun we’d have as a family. Here are just a few reasons we’ve found the experience to be so great:

1. You are taking your child to a reading fair in disguise. 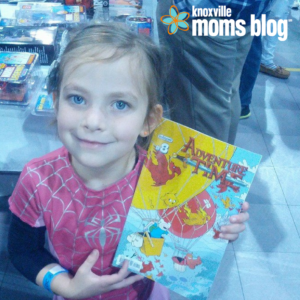 consume with enthusiasm, while some need the good stuff disguised in a “fun” package, not so easily recognized for the beneficial thing it is. Comics and graphic novels are perfect for both the ready and reluctant readers; different than your average book with very similar results. Comics can be a right-outside-the-box approach to boosting literacy and engaging otherwise disinterested students. Got a kid who loves tv shows and movies but won’t touch a book? Here’s your bridge. Most vendors will have something for every age, but if they don’t, they can steer you in the right direction or even order what you’re looking for. Aside from collector’s items, comics are typically fairly inexpensive, and conventions will often have better-than-usual pricing. What’s not to love?

2. You never know who you’ll run into.

My crew is never as starstruck as they are at conventions, and I’m not even referring to the special guests the events host. Cosplay, the practice of dressing up as a character from a movie, book, or video game, is an enormous part of 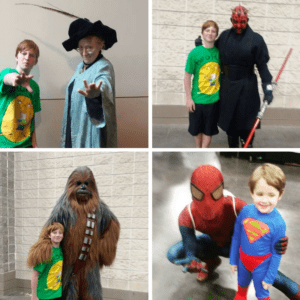 comic-cons. The time, energy, and detail that goes into costumes is unreal, and your family can get a full character experience just by running into other attendees. We’ve encountered everything from a Disney princess to a Dalek, most all executed impeccably. To a younger child, it’s pure magic. To the older ones, it’s just downright impressive.

3.  You can make the most out of those Halloween costumes.

Get-ups for trick-or-treating are often a touch pricey and/or a little time-consuming, especially for something that’s only worn one night a year. Stretch your time and money, and tell your little one to throw that cape back on — they’re a cosplayer now! Since moving back to Knoxville, we’ve learned to save our costumes because we know that we’ll have at least two local conventions to attend annually, and the kids will most definitely choose to suit up when given the option.

4. There’s something for everyone.

Listen, I know there are many people who would think this wouldn’t be their thing. Sci-Fi may not be your jam, and that’s okay. It’s a big component, but certainly not the only one! The blend of pop culture, nostalgia, and art makes these conventions a much broader experience than you may think. I have yet to find anyone who didn’t find at least one thing to love…even if it happened to be medieval weaponry (oops).

We haven’t attended a single convention where kids 12 and under weren’t free. Knoxville’s own Fanboy Expo is no exception.

I have honestly never met a kinder, more inclusive 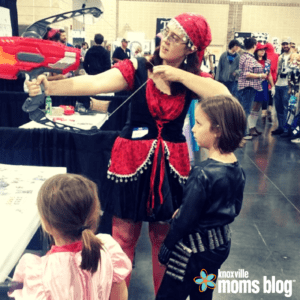 group of people in my life. It wasn’t something I necessarily expected when we took Baylor and a friend the first time, but the atmosphere just sold me once and for all. There has yet to be an artist, a cosplayer, or a vendor who wasn’t willing to answer questions, encourage a budding talent, or go into full character to make one of the kids smile (Jokers seem especially big on this!). I asked a friend who frequents the conventions if she thought it’d be okay for Bay and his pal to request pictures with other guests, and we were told to go for it. She pointed out that people work hard on their costumes, and usually enjoy the appreciation of that effort. She was absolutely right. We’ve had only great experiences so far!

7. You can let your inner kid out. 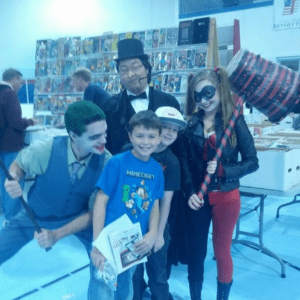 As mentioned before, these conventions are full of nostalgia. My son especially loves seeing his dad get excited about finding relics from his childhood. I mean, there’s just so much fun stuff to explore. Be silly with your littles, play along with the characters you come across, share the stories that come flooding back when you see that He-Man or Jem (love you forever though, Misfits) figurine. Some parents even dress up with their kids, which I think is amazing. Personally, I’m still trying to keep up with everyone else’s costumes, but maybe one day. My point is: just leave all your ideas about adulting at the door for a couple of hours. It’s totally worth it.

So…ready to geek out yet? Can’t wait to attend the next event? If you’re in the Knoxville area you’re in luck: Fanboy begins Friday and runs through Sunday! Please check out their site for dates, times, guests, contests, and special events. If you see me chasing behind some pint-sized heroes or “billains” as my youngest calls them, be sure and say hi!