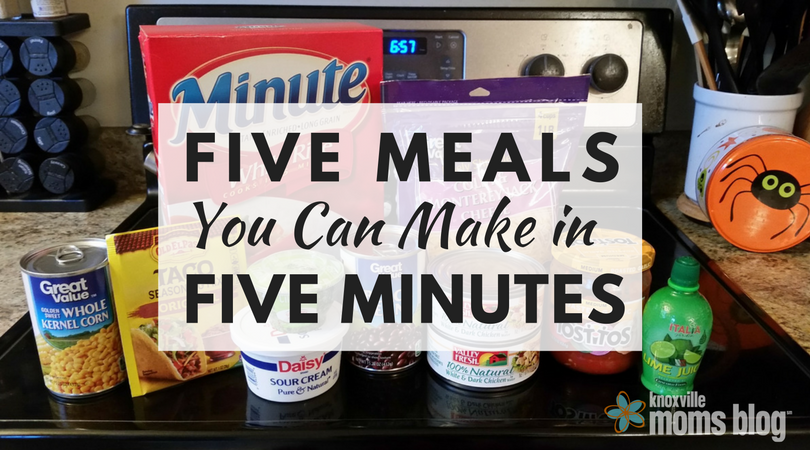 School is in full swing now, and for me, that not only means a full day for my kids, but a full day for me as well (because I’m a teacher). It seems like as soon as we get home from school (which on most days is 5:30pm or later), the kids are hungry right now, and they were ready to eat five minutes ago. They aren’t willing to wait 30-45 minutes for me to make a meal. Which means if I don’t have any leftovers in the fridge, I’m in trouble. In my weekly meal planning, I generally try to include at least one or two meals that I can make in a hurry on days in which I just don’t have enough time.

I have scoured the internet and Pinterest looking for meals that can actually be made in minutes, and let me tell you, they are hard to find! Many people claim to have a five-minute recipe that ends up taking 20-25 minutes in real time. There are also a lot of five-minute preps for 30-minute meals out there (which is helpful, but not ideal on those days when my children are laying/rolling in the floor, whining that they’re starving — not something I can endure for 30 minutes).

So while I can’t claim that these meals are super healthy, here are five meals that you can get on the table in a matter of minutes: 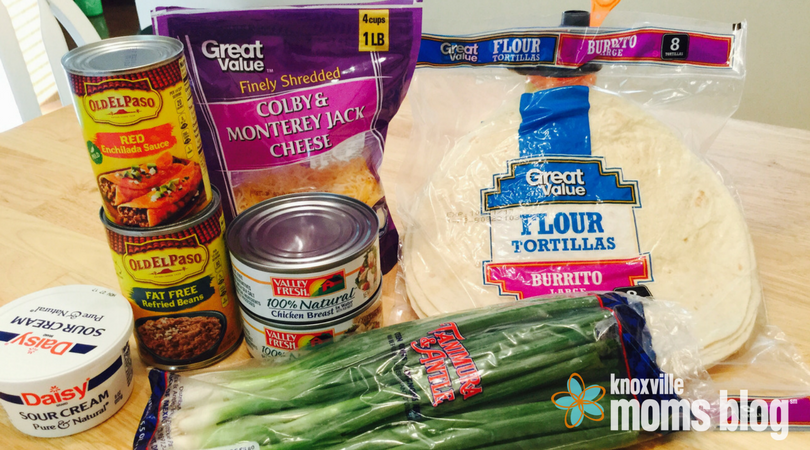 Grab a few tortillas and place small pieces or shreds of chicken down the center. Pour a little enchilada sauce and cheese on top of the chicken, then roll up the tortillas and place them seam-side down on a plate. Top them with more sauce and cheese. Pop the plate in the microwave for one minute and 30 seconds, or until the cheese is melted. You may want to garnish with some extras (like sour cream or chopped green onions) or serve a can of refried beans on the side. And…you’re done! 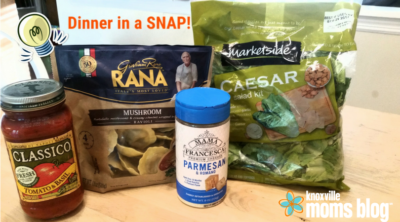 Bring a few cups of water to a boil on the stovetop. Pour in the contents of your pre-packaged ravioli. Once the water returns to a boil, turn the temperature to medium so that it’s just gently simmering rather than cooking at full boil (you’re less likely to have your ravioli burst open this way). Simmer for four to five minutes. Drain the water, pour the pasta sauce directly onto the ravioli in the pot, and stir it together. It’s ready to serve. You may want to place some extras on the table, such as Parmesan cheese, a serving bowl of salad with dressing, or some bread. And…you’re done!

Start boiling your water on the stove (the amount you boil depends on the amount of Minute Rice you’re making, so make sure to read the package carefully). While you’re waiting for the water to boil, heat a small frying pan at medium-high heat. This step is optional, but I like to heat the chicken on the stovetop and add taco seasoning to it. This adds some extra Mexican flavor, especially if you’re using canned chicken, which tends to taste very plain. Drain most of the water from the cans of chicken (or just pull some small shredded pieces off of the rotisserie chicken, if you’re using that), and place it directly in the pan. Pour at least half of the taco seasoning into the pan and stir the chicken with the seasoning until it’s thoroughly mixed and heated through. Boil your rice (which should only take a minute or two) according to the package directions. If your rice looks watery, continue boiling it until the water is gone. Add your chicken directly to the rice in the pot, and stir it until it’s mixed. Add your can of black beans (drained and rinsed in a colander) and can of corn (also drained) directly into the mix, and stir those in as well. Add any garnishes that you may want (a generous squirt of lime juice to the rice, plenty of chopped cilantro, and shredded cheese and sour cream on top). Serve with a bowl of salsa and tortilla chips. And…you’re done! 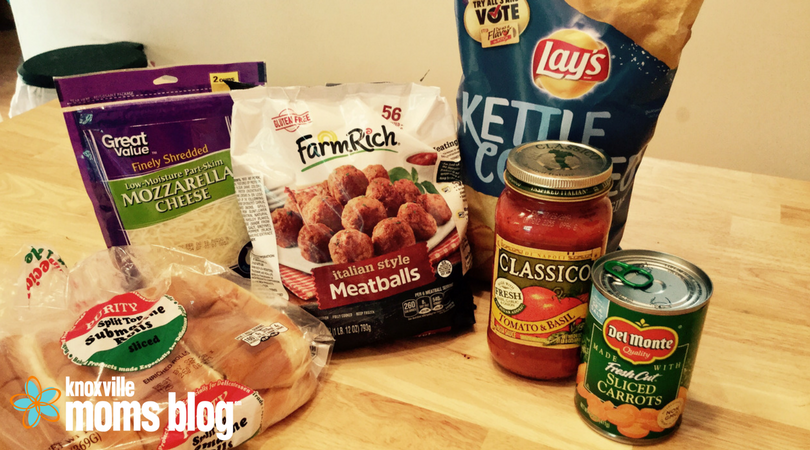 Your serving size depends on the amount of people you’re feeding, but I would suggest heating about half a bag of frozen meatballs to serve the entire family. Follow the directions given on the package for microwaving the meatballs. Most meatballs can also be cooked on the stovetop or in a crockpot, but those methods will, of course, take longer than just a few minutes. Open up your hoagie rolls and place 3-4 meatballs on each sandwich. Cover with a generous spoonful (or two) of the marinara sauce, and sprinkle with mozzarella cheese. You may want to place the entire sandwich back into the microwave for 30 seconds or so just to heat the marinara sauce and melt the cheese. Serve it up with some canned or frozen vegetables on the side, or possibly some chips. And…you’re done! 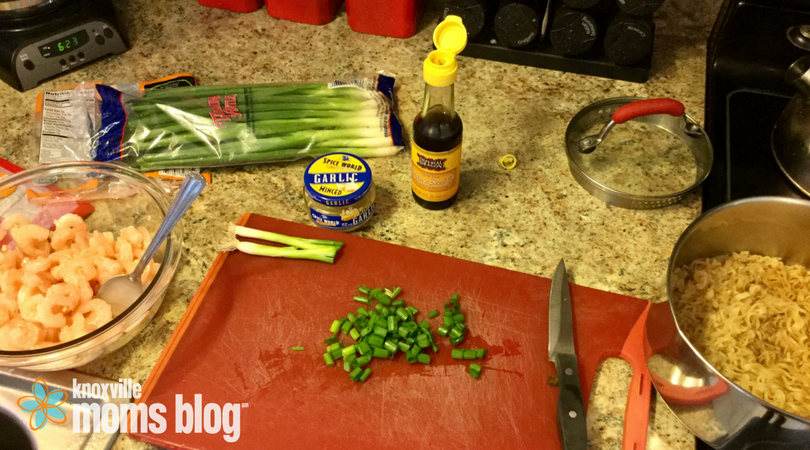 Pour the frozen bag of shrimp into a colander in the sink and run cold water on it for about five minutes to thaw the shrimp. While that water is running, put two pots on the stove, filling a large one with 3-4 cups of water, and a smaller one with just 1 cup of water. Bring them both to a boil. Empty the bag of snow peas into the small pot of boiling water and allow it to cook for 3-4 minutes. While it cooks, put the Ramen noodles into the larger pot (the amount of packages you cook just depends on the number of people you’re feeding). Follow the directions on the bag, covering and allowing it to simmer for a couple of minutes. Put the shrimp in a serving bowl and toss them with the minced garlic, and sesame oil (the shrimp would taste more flavorful if you allowed some time to marinate them, but we only have five minutes, so…). Once the noodles are finished, stir in the seasoning packets (you may not want to use them all, because that’s a lot of sodium), and add in the contents of the shrimp bowl. Stir it well. Garnish with chopped green onions, sesame seeds, and soy sauce to taste. And…you’re done!

So tell me, which recipes are you going to try this week? What are some of your favorite 5-minute meals that weren’t included on this list? 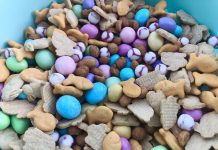 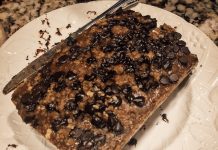 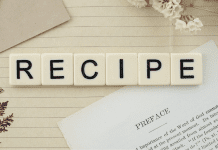